The Silky F180 folding pruning saw is a lightweight yet robust entry level folding saw, and is one of our fastest selling saws at Briants. It’s design and build is aimed at the domestic end of the market, and will be used predominantly for pruning around the home, garden and other areas. For the home gardener looking for a quality but cost effective pruning saw, look no further than the Silky F180! The blade itself is 180mm long, impulse hardened, Chrome plated and ‘Miai-Me’ (terms explained below). It’s blade features 7.5 teeth per 30mm and will lock in two different positions to allow flush cutting. The blade is not suitable for sharpening, however we can supply replacement F180 blades and also keep a range of spare blades and parts for other Silky Saws. To replace the blade it is just one screw which needs to be undone on the handle of the saw. The handle itself has been manufactured from ‘fibreglass polypropylene’ and has a rubber insert and sure grip which reduces the risk of slipping, even in wet conditions or when wearing gloves.

How is this Folding Pruning Saw Made?

The SK-4 carbon steel used to make the blade is laser cut. The teeth, designed with no set, are formed within the width of the blade, reducing friction leading to a much cleaner, smoother and faster cut, compared to the majority of other pruning saws whose teeth may be formed to project outside of the blade width, which leads to far more effort needed from the user to make a cut.

The inside of each tooth has 4 razor sharp cutting angles, which is what Silky’s ‘MIRAI-ME’ term refers to. It will essentially mean that when the blade cuts through the branch, the amount of splintering is reduced so the cut is much finer, and will destroy up to 50% less cells within the wood, which cuts the risk of disease and means the tree will heal far faster than if it were to be cut with a non MIRAI-ME blade.

Silky also use high-frequency electro-impulse hardening during their manufacturing process, during which the teeth are heated up and hardened off for added strength. Infact a Silky saw could stay sharp for as much as 3 times longer than a non impulse hardened equivalent.  The key to this process is making sure the teeth are the only part of the blade that is ‘impulse hardened’ leaving the main body of the blade to retain it’s flexibility. A chrome plating is added to the blade to protect against rusting and sap adhesion to even further extend the lifespan of the blade.

How to Use a Silky Folding Pruning Saw Correctly

A Silky saw is built to stay sharp and last a long time when used correctly. They are all designed to cut on the ‘pull-stroke’ only. It is important to note that if excess pressure is put of the saw during the ‘push-stroke’ then the user will be pushing against the natural direction of the teeth. The phrase which sums it up perfectly is ‘let the saw do the work’. A bit of a chiche, but entirely true when using almost any saw to a certain extent, but certainly in the case of Silky saws. The razor-sharp teeth will glide through the timber with a small amount of pressure being applied on the ‘pull-stroke’ only. Never twist the saw at any time during the cut, and it should not be necessary to make aggressive or jerky movements.

When storing the folding pruning saw, it should be in the closed position and it is also good practice to clean the blade of any dirt or debris. Store away from moisture sources. 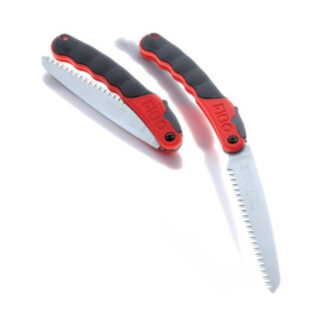 You're viewing: SILKY F180 Folding Pruning Saw – 180mm From: £21.00 inc. VAT. (£17.50 ex. VAT.)
Rated 5.00 out of 5
Add to basket
We use cookies on our website to give you the most relevant experience by remembering your preferences and repeat visits. By clicking “Accept”, you consent to the use of ALL the cookies. Read More
Cookie settingsREJECTACCEPT
Manage consent

This website uses cookies to improve your experience while you navigate through the website. Out of these, the cookies that are categorized as necessary are stored on your browser as they are essential for the working of basic functionalities of the website. We also use third-party cookies that help us analyze and understand how you use this website. These cookies will be stored in your browser only with your consent. You also have the option to opt-out of these cookies. But opting out of some of these cookies may affect your browsing experience.
Necessary Always Enabled
Necessary cookies are absolutely essential for the website to function properly. These cookies ensure basic functionalities and security features of the website, anonymously.
Functional
Functional cookies help to perform certain functionalities like sharing the content of the website on social media platforms, collect feedbacks, and other third-party features.
Performance
Performance cookies are used to understand and analyze the key performance indexes of the website which helps in delivering a better user experience for the visitors.
Analytics
Analytical cookies are used to understand how visitors interact with the website. These cookies help provide information on metrics the number of visitors, bounce rate, traffic source, etc.
Advertisement
Advertisement cookies are used to provide visitors with relevant ads and marketing campaigns. These cookies track visitors across websites and collect information to provide customized ads.
Others
Other uncategorized cookies are those that are being analyzed and have not been classified into a category as yet.
SAVE & ACCEPT